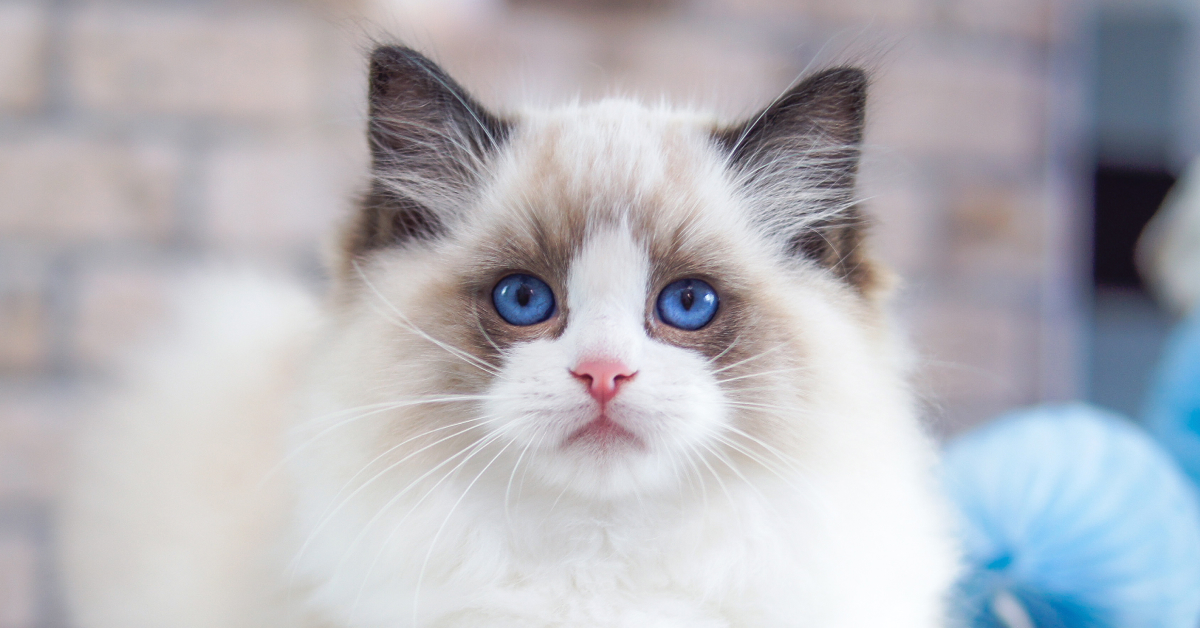 A cat that looks like a rag doll? Not quite! The Ragdoll is a breed for Siamese lovers. They don’t just impress with their beautiful fur or intense gaze.

Origins of the Ragdoll: a young purebred cat

The appearance of the Ragdoll: large cats with semi-long hair

This large, massive cat with a broad chest and a muscular body is distinguished by its very soft coat. Its mid-length dress which has few undercoats has a silky touch, which gives the animal a fluffy appearance. Moreover, this impression is amplified by the presence of a collar around the neck of the Ragdoll.

Its head is medium, wedge-shaped and its ears are rounded, fairly wide apart. Its hind legs are a little longer, which slants its back slightly. His large, bright blue eyes make him an exceptional cat.  The Ragdoll Cats are one of the big pedigree cats. Females weigh up to 6.5kg while males can weigh up to 9.5kg. They can measure up to 1.20 meters in length (starting from the nose to the tip of the tail) and 40 cm in height.

How big is an adult Ragdoll? This question is frequently asked. It takes a while for a Ragdoll to reach its full size. They are not fully grown until they are 3 or 4 years old.

With the Ragdoll, different colors are possible: seal, blue, chocolate, lilac, red, and cream-point are the most common. The official names are Colourpoint, Mitted, Bicolor, Tabby, Tortie, and Torbie.

Colorpoint: the Colourpoint gives the impression that the cat presents an entire mask

Ragdolls are very social cats. They are gentle, docile, peaceful, and curious but above all playful and cuddly and love to track their master. Many breeders often call them “dogs in cats’ bodies”. The Ragdoll often fully integrates into its family. However, for his well-being and development, we recommend that you ensure that he has a playmate. Cats have long been considered solitary animals, but the most sociable ones like Ragdolls enjoy life with their congeners.  Finally, they are animals that love to be carried, because of the confidence they have in us.

To learn how to build your own cat tree, check out our item!

In addition, you can totally adapt a Ragdoll if you have young children or other animals. Their calm and calm temperament makes them very sociable.

Care: how often to brush a Ragdoll?

The breed’s medium-length coat is low maintenance due to the lack of an undercoat. However, weekly grooming can be made easier if you get him used to it from a young age.

However, during molting in spring and autumn, it is recommended to carry out daily brushing. Particular attention should be paid to the hair on the belly and between the legs, which can easily get tangled. As cats groom themselves, they swallow a lot of hair. To help them get rid of hairballs, you can provide them with catnip.

Health: what are the most common illnesses in the Ragdoll?

They don’t have any particular health issues. Nevertheless, some of them have a predisposition to certain hereditary diseases, such as hypertrophic cardiomyopathy (HCM).

It is the most common heart disease among them. It is caused by a thickening of the myocardium and can be diagnosed by echocardiography. There is a genetic test to detect HCM, so breeders can remove sick animals from the farm early enough.

But if your Ragdoll is not affected by the disease, he can easily live between 12 and 15 years.

Purchase: from a responsible breeder

A professional breeder considers his cats as members of his family. He takes responsibility for his animals and their offspring. This also implies a thoughtful mating of the animals, good prevention in terms of health and an environment as well as a healthy diet for Ragdoll.  Kittens should never be given to their new owners before they are 12 weeks old in order to be properly weaned. In order to protect the mother, the breeders made sure that there was enough time between each litter.

How To Pick A Salon That Is Right For You

What is the UPPCL JE exam? Who can...